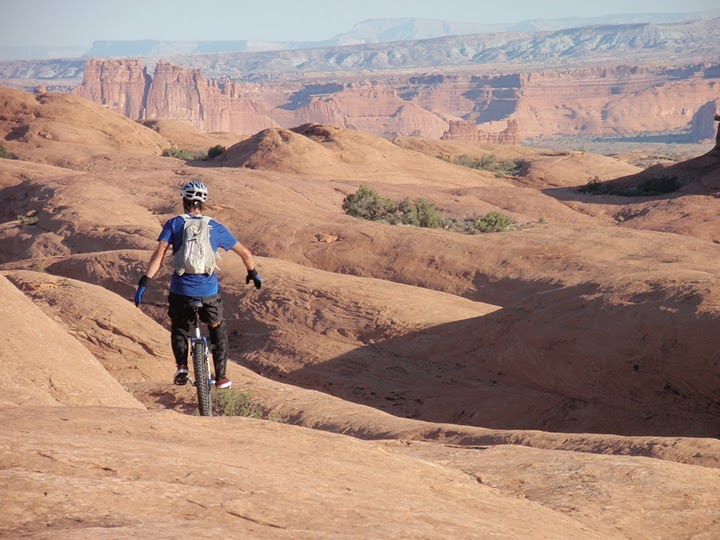 
I took a good break at Sherman, sitting in a chair for the first time while I restocked my pack with the contents of the only drop bag I’d use at the race. I scarfed down some more water mellon (see a theme here?) and asked if they had any popsicles (they did) and eat that too. I then drank a whole bottle of water too fast and my stomach instantly cramped up. Ouch! I just sat there and took a few deep breaths and the uncomfortable knot loosened up. Phew! Then I was out of there, once again chasing to keep “the group” in sight. The group roughly consisted of me, Darla Askew, Rob Erskine and Mikio Miyazoe along with a few others from time to time; Sarah McCloskey, Jon Teisher, David Coblentz…
The next section I’m very intimately familiar with as I’d been vacationing in the Lake City area and we pass by Sherman and this section of the course to do several 14ers in the area. We began our approach to Handies Peak (14,048’), the highest point on the course, up the long Cinnamon Pass Road that is often sees heavy ATV and Jeep traffic as the road is part of the popular Alpine Loop. Luckily most of the traffic we saw were crews and they kept the dust stiring to a minimum. The uphill grade over the next four miles to the Burrows Park aid station (32.6 miles) or so is fairly slight so we all tried to run as much of the 4x4 road as we could. This is an amazing road, a single lane literally blasted into the side of the mountain to form a “shelf”; on one side is the steep rock wall on the other a 200’ drop into the upper Lake Fork river!
After a quick top off of our bottles at the aid station the group set off up the mountain. I again lingered a touch behind, hilariously getting several refills of water in my piss-cup by a volunteer carefully pouring a large and heavy 5 gallon container! Something just not right about that! Anyways I soon closed most of the gap on the group but then started to feel my stomach sour once again as we approached treeline. Doh! And double Doh! I therefore had to slow down to keep my stomach under control. I downed a bunch of pure sea-salt and felt a bit better but I just had to limit my intake of anything for a while to let my stomach calm down. The group began to splinter as we entered the upper bowl of Grizzley Gulch; Darla now a distant dot followed by Rob then Mikio. I continued to slowly trudge up the mountain trail and was passed by a couple other folks (David and Sarah) but caught up to another runner who seemed to be struggling as much as I was (Joshua Mietz?).


At last I topped out on Handies and began the fun, swooping switchbacking descent to Sloan Lake in deep into American Basin.
Despite my sour stomach I enjoyed the run down the mountain and seemed to be making up a bit more ground on the group. But all downhills come to and end and I began the climb to American-Grouse Pass (13,020’) feeling a bit better but now very thirsty. I wanted to drink but my bottles were full of stuff I really didn’t want to even sip on anymore. So, being still well above treeline and right at the head waters for the Lake Fork of the Gunnison River I decided to chance it. I dumped my bottles of the sweet gunk and refilled them both in one of the many cold, clear and fast running streams in the area. I even downed a whole bottle before refilling it. I’ve never tasted water so pure and clean! Wow! I still felt pretty warm too so I dunked my head and shirt in the stream as well to cool off. Along in this stretch uphill I caught up to Jamil Coury who was having a rough patch as well though he seemed to be reduced to hiking 100 yards or so and then stopping to sit. I told him to stick with it that he’d feel better soon enough; plenty of race to go and plenty of time to do it in. I eventually reached the pass all alone, my group now completely out of sight. No worries, I was now descending to Grouse Gulch Aid Station (42.1 miles) where I’d see my crew for the first time and pick up my pacer! So down, down I ran, sucking on a mint to ease my stomach and get a few calories in me.
I arrived at Grouse Gulch at 5:51 p.m. feeling pretty darn good except for my blasted stomach! It was great to see my wife Kathy and my friend Eric Fritz! I sat down at the aid station and drank several piss-cups of ginger ale, ate some more water mellon and probably had a bit of potato soup. Kathy was anxous to not let me linger too long so soon enough she was pulling me out of the aid station even as she stuffed my headlamp and a wool layer into my pack. Before I left I downed a whole bottle of iced tea (unsweet) that was like nectar! Yum!
With Fritz in-tow we started up the Engineer Pass Road towards the namesake pass (12,910’). After hiking for fifteen minutes or so we looked behind us a the Grouse Gulch aidstation and the valley towards Silverton beyond. It looked like looking into a dark tunnel, midnight black storm clouds were building up behind us that looked like they were heading for the pass as well! Yikes! We continued to climb smartly up the road; distant thunder seemed to be getting closer and closer though right in front of us, over the pass the sky looked to be quite a bit more friendly with the gradually setting sun. Several switchbacks later we caught up to Rob and his pacer, talked a bit and then plodded on. Once onto the final switchback to the pass we could see sheets of rain coming up the valley after us; the Grouse Gulch aid station and Handies beyond seemed to already be getting a good soak! Fritz and I topped out and began the steep,  mile long high alpine crosscountry descent to Engineer Aid Station (48.6 miles) just as the wave of rain finally caught up to us.
As I was feeling extremely warm still the cooling rain actually felt pretty good to me. I might have been seeing things but I swear I could see clouds of steam rolling off of me! Ha! We arrived at small aid station at 8:02 p.m. as the wind really began to pick up and the rain fall a bit harder. The storm sounded quite a bit more fierce under the aging tarp which really whipped around and shook very loudly. I paused only long enough to eat some potato soup and drink some soda. I did donn my Patagonia Houdini Jacket as I thought I was going to really cool off now that the sun was low in the sky and the rain and wind were picking up. Wrong.


Fritz and I descended on good trail towards Ouray as the light began to fade. Luckily the squall seemed to abate and soon I was again too warm and so unzipped my jacket and pushed up the sleeves; I didn’t want to stop to take it off and ruin our good downhill running flow! Soon we caught up to Sarah who seemed to be struggling a bit herself. Together we all emerged onto one of my favorite sections of the course; the infamous Bear Creek trail. Like the shelf road I described that climbs to Burrows Park, this trail, 3’ wide at the most is blasted into the side of the mountain. Off to the left is an abyss, a 300’-400’ drop, and to the right a shear wall of rock! Watch your step! Can you say acrophobia and exposure! Luckily we still had some daylight left as we passed through this wonderful section so we got to see just how far down we’d plummit to our deaths if we were to accidentally trip! After the shelf trail it was finally time to cut on our lights for the night.
At last we emerged into the Umcompaghre Gorge with the night lights of Ouray in sight though still over 2400’ below us! We descended multiple switchbacks on the slate strewn trail; our footsteps sounding like stepping on broken china. The wind really seemed to pick up at this point and we were pelted by sideways rain drops frequently! Ouch! We finally crossed the Highway 550 tunnel and made our way into town and arrived at the Ouray Aid Station (56.6 miles) at 9:57 p.m.. I was now half way through the four major sections of the Hardrock course and still feeling good! My stomach was back and I was pumped to get going back into the mountains in the cool, damp night! To be continued...
Posted by Rob Youngren at 7/23/2013 08:00:00 AM